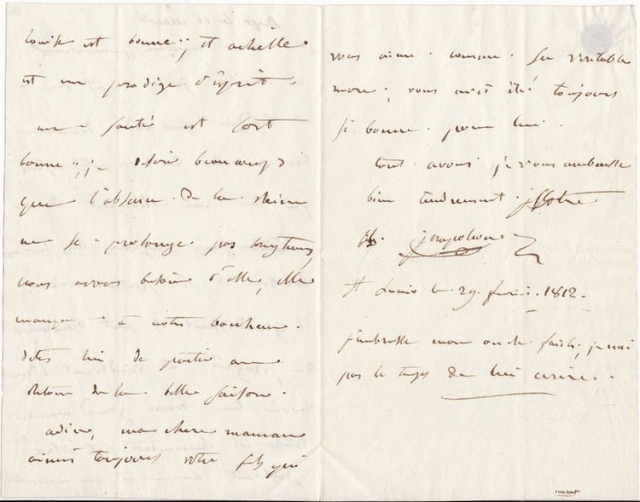 Letter from Joachim Murat to Maria-Letizia Bonaparte (mother of Napoleon; commonly referred to by the Emperor as “Madame Mère), Naples, 29 Feb 1812. At the time that Murat wrote this, his wife Caroline was in Paris, working once more as a go-between to salvage the increasingly fractured relationship between Murat and Napoleon. The Emperor, meanwhile, was preparing to invade Russia, and intended on Murat leading his cavalry (though in typical Napoleon fashion, he reveled in seeing his errant brother-in-law reduced to begging him to accept his service before Napoleon benevolently “relented” to let Murat come along). The disastrous campaign would begin later that summer.

My dear mama, I don’t want to let the son of M. Baudus leave without giving you some news of your grandchildren who all charge me to convey to you their tender caresses. They are doing well, they are growing up and making a lot of progress; they would very much like to see their good grandmama again. Laetitia is charming, she’s your portrait. Lucien is a darling, Louise is good and Achille is a prodigy of spirit, their health is very good. I hope very much that the queen’s absence will not last long, we need her, our happiness lacks for her. Tell her to leave at the return of the good weather. Adieu, my dear mama, love always your son who loves you like his own true mother, you have always been so good to him. All yours, I embrace you tenderly.

I embrace my uncle Faich [sic–Fesche]; I don’t have time to write him.